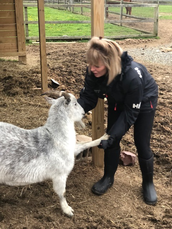 Additionally, Deb is committed to the need and care of animals.  She founded For Love of Animals LLC (“FLOA”) and is acquiring a facility and land in Rhode Island and eventually Colorado to further the wellbeing of animals of all types that need care medical assistance and love.